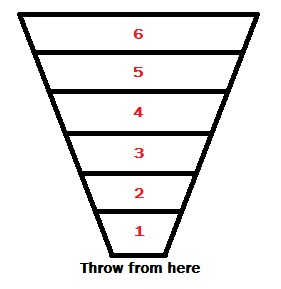 This youth group game is great, if for no other reason than the weird name of the game – the Welly Wang!

In the UK, a welly is a Wellington Boot – otherwise known elsewhere as a rain boot, galosh or gumboot. A Welly Wang is therefore a boot throwing competition.

To set up this youth group game, you’ll need a big enough outdoor space for youth to throw the welly. Take a roll of duct tape and mark off the field layout shown in the image on the right. It’s a little like a javelin or shotput field, along with horizontal lines.

The Welly Wang can either be played in teams or have the young people play solo. Teams tend to work better though, as it means youth that don’t have a strong throw can still contribute to their team’s overall score, rather than not having a chance from the beginning.

To play, the youth stand behind the line marked “Throw from here”. They take a welly and throw it as far as they can, making sure it stays in bounds to the left and right. If the welly lands outside of the left or right lines, their throw doesn’t count.

If the welly lands within the left and right lines, they earn points depending on how far it’s gone. In the event that some of your youth can throw beyond the far line, have them score a flat 10 points.

Other options for scoring:

There are a number of different techniques the young people can use in this youth group game:

The amount of turns the young people get in this youth group game depends on how many young people you have. If you’ve got a really large group, you may only have time to let the young people have a go at the Welly Wang once each. With smaller groups though, try to let them each have a few throws so that they can try different techniques.

If you like this idea (or even if you don’t!), check out our other youth group games.

Question: Are there any additional rules you use when playing The Welly Wang? Let us know in the comments below.