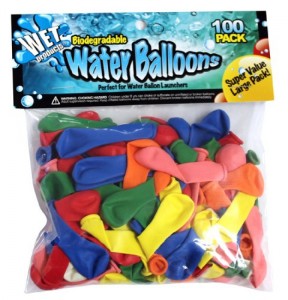 This week’s addition to our collection of youth group games is a water balloon relay – fun to play, simple to organize and potentially very, very wet!

Here’s how to play the Water Balloon Relay:

Have each team line up behind a bucket of water balloons. The first person from each team should put one of the balloons between their legs.

The challenge is for them to move to the other marker, go round it and then return back to the starting line. They can try to do this by jumping, shuffling, waddling, crawling or any other possible movement.

As this is a relay, when they get back to the start line, the next person on their team does the same thing.

Due to the nature of this youth group game, there’s a good chance that players will get very wet due to the balloons bursting while they’re in the race. If that happens, there are a few options you can choose to enforce:

If a player bursts their balloon, they’re out – the next player on their team then has their turn.

2. Three strikes and you’re out!

Similar to the first option, a player gets three opportunities to complete their leg of the relay race. If choosing this option, a player has to continue from where they burst their water balloon.

If choosing this option, try to have volunteers on hand to give them replacement balloons – that will help ensure they continue from the same spot. It also means that you’ll need to prepare three water balloons per player in advance, just in case.

With this final option, players get as many opportunities as they need to complete their leg of the relay. They have to continue from where they burst their water balloon.

Again, try to have volunteers on hand to replace the burst water balloons. One thing to bear in mind is that you’ll need to prepare a much larger number of water balloons. If a player uses too many on their turn, it could result in some players not getting a chance, so this isn’t recommended unless you have a small youth group and lots of balloons!

This will depend on which of the three options above you choose. With both the one and three strikes options, the winning team will either be

If playing the unlimited do overs option, the winning team is the one that finishes first.

If you want to offer a prize, an option that the youth will love is to let the winners throw the rest of the balloons at the leaders!

If you liked this idea, check out all our other game ideas.

Question: Have you ever played this water balloon relay? If so, did you add in anything else or have different rules? Or can you think of any other good prizes/rewards for the winners? Let us know in the comments below.