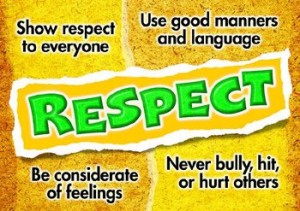 Young people (and adults!) through the ages have had trouble respecting others. Today’s youth work session idea looks at ways you can approach teaching respect to teenagers and how to help them consider this issue more deeply.

One of the first steps in teaching respect to teenagers is to get them to think about people who they do respect and who they don’t.

To do this, divide a sheet of paper down the middle, with “Do Respect” on one side and “Don’t Respect” on the other. They should then think of all the different groups of people they know and place them in one of the two columns. This could either be done together as a group on some flipchart paper or individually on their own sheet of paper.

If they have a hard time thinking of different groups, here are some ideas to prompt them (not all of these may be applicable to your teenagers):

With movie stars, pop stars, etc, have them name specific celebrities, as this will help with the next section.

Now that they have a list of people who they do or don’t respect, the next step is to find out reasons why they feel that way about each group / person. Encourage them to be as specific as they can – instead of a reason being “Because they’re stupid”, have the teens elaborate on reasons why they think the group / person is stupid.

This can give you far more insight into why the young person may have such a hard time showing respect to certain people. For example, you may find out that the reason a young person hates the police so much is because they arrested their father for physically abusing them.

As this section could lead to personal and sensitive information being involved, it might be worth getting the youth to write their reasons down individually, so that it’s only you that will see their answers.

As this is a more positive section, it should be OK doing this as a group rather than individually.

Now that they have a list of people who show them respect, ask them for examples of how these people show them respect. Again, ask for specific examples – instead of “Because they’re nice to me”, try to have them explain exactly what it is that’s showed them respect. This could be their tone of voice, smiling at them, that they praise them when they work hard, etc.

When someone respects me…..

When I respect someone else…..

This activity could be done by giving each young person a pen and some post-it notes to write down their thoughts. These could then be stuck on the flipchart next to each person / group if you’ve been using a flipchart.

The previous activity will hopefully have helped your teenagers to start internalizing some of the benefits of showing respect. This step will help them internalize ways that they can do this.

Provide each young person with some post-it notes and a pen (if they don’t have them from the previous activity). Get them to write down three ways that they could show respect to each person / group that was listed in the first activity, regardless of which column they were listed in.

On the flipchart, write each person / group on a separate sheet. Once the youth have come up with three ways to show respect to each person, have them stick the post-it notes around their name on the flipchart. Read out all the different options as you go along, so that your teenagers are teaching each other how to respect.

If they have a hard time coming up with ideas, explain that they could show respect through things they say or do, or maybe even things they don’t say or do.

Finally, set them a challenge – to intentionally show respect to every person /group listed over the course of the next week (or until the next time your group is due to meet).

At your next meeting, get the youth to report back on how it went by asking some questions. These could include:

Try to focus on the positive as much as possible and celebrate their achievements, as this will encourage them to continue showing respect.

Question: What other tips do you have for teaching respect to teenagers? We’d love to hear your ideas in the comments below.