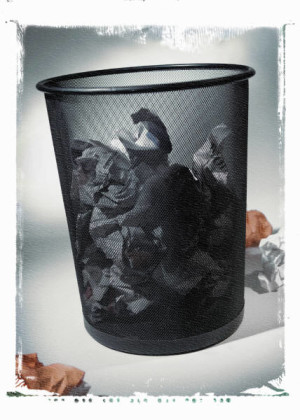 If you want to play a fun youth group game that can be used in all kinds of ways, give Great Balls Of Paper a go.

It’s active, versatile and requires no preparation – here’s how to play it:

No preparation is necessary – perfect for when you need to switch from one youth group activity to another without having time in between to set up.

This can be played indoors or outdoors.

The basic instructions for this game are that you’ll have some young people holding a wastepaper basket on top of their head.

About 10-15 feet away from each of them, other youth will be standing with some newspaper. Their challenge is to scrunch up the paper and try to throw it into a basket.

As we mentioned, this game is pretty versatile, so here are some different ways it can be played:

Pick 6 or 8 young people to play this upfront and split them into pairs. One person from each pair will be the basket holder and the other will throw the newspaper

To get your entire youth group playing this, organize it as a relay game. Split them into teams, with the basket holders standing in a line.

Their teammates stand in a line and take it in turns to throw paper.

Split the youth into four teams. The teenagers holding the wastepaper baskets need to stand in the center of the playing area with their backs to each other, thereby facing in four different directions.

The rest of the players need to stand in a row in front of their teammate, effectively creating a square/diamond around the players in the center. When you say go, they have to start throwing the paper.

This means there’ll be loads of newspaper flying through the air at the same time. It also means that if they’re not careful, they might miss their team’s basket and fill up an opponent’s instead.

Use masking tape on the floor to indicate where the basket holders should stand, as well as to mark out a line that the throwers should stand behind.

There are also a couple of ways to choose a winner:

If you liked this idea, check out all our newspaper games, along with all our other games for youth groups.

Question: What would you suggest to make Great Balls Of Paper even more fun? We’d love to hear your suggestions in the comments below. 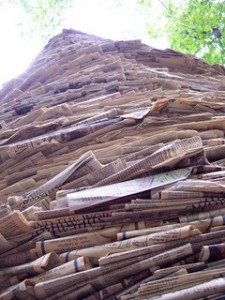 The Newspaper Tower Challenge is a game I remember playing – and loving – when I was younger. It’s perfect when you want a team building game that involves all the young people in your youth group.

The way the newspaper business is going though, you may not have many more years to play this game!

You can expect the Newspaper Tower activity to take about 30 minutes in total. Allow approx. 5 minutes for explaining the activity, 20 minutes for them to work out their newspaper tower design and to build it, then 5 minutes at the end to measure all the different towers.

Split the young people up into teams and give each team the same amount of newspapers and one large roll of sticky tape.

If you have the space, spread the teams out in different rooms so that they can’t copy each others’ design.

The challenge is for the young people to work out how to build a newspaper tower that’s the tallest. They can only build the tower using the newspapers, tape and scissors – no other resources are allowed.

The newspaper towers have to be free-standing – team members can’t support it or have it resting against a wall.

Set a time limit on how long they have to build the tower, including enough time for them to discuss a strategy before they start building.

The winning team is the one with the tallest tower. On the off-chance that you have two teams with towers that are the exact same height, there are a couple of tiebreaker options you can use:

1) Design – award the win to the team that you judge to have the best design. This can either be:

2) Stability – award the win to the team that has the most stable structure. There are a couple of ways of doing this too:

If you like this idea, check out our other youth work games.

Question: Do you play the Newspaper Tower Challenge in a different way to this? If so, let us know what you do differently in the comments below.

Today’s youth work game is one to get all your young people involved in – Newspaper War. It doesn’t matter if you only have four or forty youth – they can all take part.

Split the room into four sections of equal size by making a cross on the floor using the masking tape – either triangles or squares are fine.

Split the youth into four teams of equal size and have each group stand in one of the sections. Each team is given a pile of scrunched up newspaper balls.

The aim of the game is to be the team with the least amount of newspaper in your zone at the end of the game. The youth therefore have to throw or push the newspaper balls into the other teams’ zones, while defending your own zone against their attacks.

Shae’s said that the best way to win is to store up all the paper in your zone until a couple of seconds before the game ends, then dumping it all in the opponents’ zones. If your youth are smart enough to figure this out, consider not letting them know when the game’s going to end.

Otherwise, counting down the final 20 seconds can make for a great frantic end to the game.

If you liked this game idea, check out all our other youth group games.